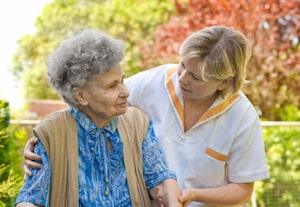 This nursing home negligence lawsuit was filed against a Genesis nursing home by the estate of a woman in Baltimore County after the woman suffers injuries from a fall. The claim against the nursing home, called the Heritage Center, is that she was only partially assisted to her bedside by a member of the nursing home staff which was inappropriate because she was at high risk for falls. It was filed in Health Claims Arbitration on May 1, 2017, and it is the 203rd medical malpractice case filed in Maryland this year.

A woman is admitted to defendant nursing home facility, Heritage Center, after being discharged from Johns Hopkins Bayview Medical Center for rehabilitation and strengthening of her lower extremities. It is noted in the woman's medical chart by the Heritage Center that she is a "falls risk" and is designated as such by a yellow band on her wrist.

While being only partially assisted to a bedside commode by a staff member, she falls to the floor and breaks her leg. The woman complains of pain in her lower extremities; however, she is not assessed until approximately seven hours later. An X-ray reveals the extent of her injuries and she is transported to Franklin Square Hospital. She undergoes a closed reduction of her fractures and is discharged to a separate rehabilitation facility for recovery. The woman passes away shortly after due to unrelated medical issues.

Have you or someone you love suffered as the result of the negligence of a nursing home who made a mistake or simply did not care enough? Miller & Zois can help you. Call us at (800) 553-8082 and speak to one of our medical malpractice attorneys who can help you or get an online case review.