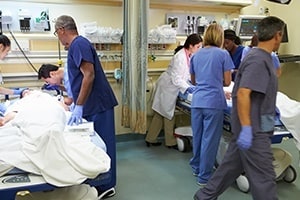 Plaintiff goes to the emergency room at Good Samaritan Hospital in Baltimore City in July 2017with chest pain, shortness of breath, cough, fever, and weakness. X-ray and CT scans suggest pneumonia, and plaintiff begins receiving IV antibiotics. The following day, he is admitted to the Intermediate Care Unit, where he receives continuous cardiac monitoring. His condition begins to improve over the next few days.

Eight days after his admission to the hospital, the plaintiff is being escorted from the bathroom back to his bed. Less than ten minutes later, telemetry monitoring indicates that his heart rate is dropping significantly and that his PR level changed. The medical records indicate that he is in sinus bradycardia, which is a slow sinus rhythm, with a heart rate of fewer than 60 beats per minute.

Despite his worsening condition, nurses do not check on the plaintiff for four or five more minutes. When they do, they find him unresponsive, pulseless, and with a heart rate of only 25 beats per minute. CPR is initiated, and his pulse is re-established after about 15 minutes. This resulted in severe anoxic brain injury, and he is transferred to the ICU. He remains in the ICU for half a month and is then transferred to a long-term care facility.

His guardian files this claim on his behalf, alleging that due to the plaintiff being left unattended in his room, without proper oxygen, for a long period, he suffered a severe and permanent anoxic brain injury. He remains in a comatose state and requires 24-hour skilled nursing care.

If you suffered a severe injury due to the negligence of a doctor in the emergency room, we will help you get the compensation that you deserve. Call Miller & Zois today to speak with a medical malpractice attorney at (800) 553-8082 or get a case consultation online.