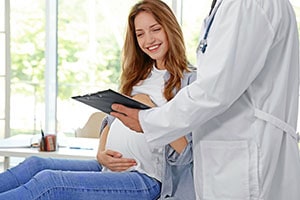 Plaintiff receives all of her OB-GYN treatment at defendant's office in Anne Arundel County. She becomes pregnant with her third child, and at twenty weeks, she has a sonogram which reveals that the placenta is too low and is blocking the baby's way out. A subsequent sonogram reveals that she still has a low-lying placenta. The fear is placenta previa which can cause a risk to both mother and child. This mom is in a high-risk group because she has had two prior c-sections. Defendants tell her they will monitor her condition closely.

At 32-weeks pregnant, the plaintiff is diagnosed by defendant nurse practitioner with a complete previa. Defendants tell her that she will need to deliver three weeks early because of this condition. Plaintiff goes for appointments weekly.

After a month, plaintiff falls after slipping on ice. She informs one of the defendant doctors, who directs her to go to the hospital for monitoring. The doctor in the hospital tells her to watch for labor signs and to come back in one week after observing her for one hour.

A week later, the plaintiff is seen again by one of the defendant doctors who tells her that he wants to deliver the baby that day. However, the delivery is not able to take place because the hospital would not be fully staffed. Defendants schedule a Caesarian section for the following day.

After the delivery of her baby, plaintiff asks defendants if she will be able to have more children. Defendants assure her that she will be.

While plaintiff is in the recovery room, she begins to have problems. Her blood pressure drops, and she passes a massive clot. She is given a blood transfusion and is diagnosed with placenta accrete. She is rushed to the operating room and has an emergency hysterectomy where her uterus, much of her cervix, and parts of her fallopian tubes are removed. She remains at Anne Arundel Medical Center for a few days and has several blood transfusions.

Plaintiff alleges that defendants should have recognized her increased risk for a placenta previa injury due to her prior two Cesarean sections. She claims that due to the negligence of the defendants, she had to undergo an emergent hysterectomy and can no longer have any children.

If you have suffered an injury due to the negligence of a doctor, Miller & Zois can help. You are entitled to compensation and justice for the harm that has been done to you. Call us today at (800) 553-8082 to speak with an attorney or get a free case review online.