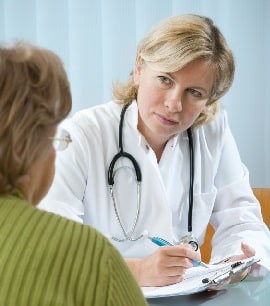 Plaintiff is diagnosed with an ovarian cyst by her primary care physician. She is referred to defendant gynecologist. Defendant gynecologist schedules surgery to have the cyst removed for the following week. Plaintiff reports this to her fiancé, who becomes worried about the urgency of the surgery and requests to meet with the doctor to ask him questions.

This meeting takes place, and defendant doctor explains that it is a simple and benign procedure involving a small incision below the belly button. Defendant doctor tells the couple there is nothing to worry about. The surgery is scheduled for twelve days after the meeting.

The surgery is done at Prince George's Hospital Center. In the preparation room before the surgery, the nurse allegedly plaintiff with papers to sign, allegedly without explaining the contents of the papers. Plaintiff is unable to read or understand the documents, but signs them without the nurse's explanation of what they were. These forms were an agreement for a hysterectomy and fibroids removal. After the surgery, the doctor explains to the plaintiff's fiancé that he had removed the woman's cyst.

Plaintiff and her fiancé allege that she would not have agreed to the hysterectomy and fibroid removal procedure if she knew that was the procedure taking place. Plaintiff is young and was not done having children, as she planned on having two more children. She and her fiancé bring this case against defendant doctor and the hospital for mental, psychological, and physical damage.

If you have suffered a physical injury due to the negligence of a doctor of hospital staff, Miller & Zois can help you. We have a history of obtaining large verdicts and settlements in medical malpractice cases in Maryland. You can go online for a free case review, or call us today to speak to one of our attorneys at (800) 553-8082.