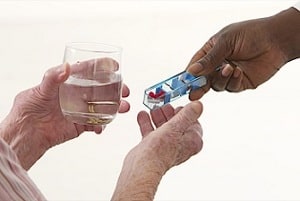 Plaintiff goes to the Vascular Access Center of Southern Maryland due to a malfunctioning hemodialysis fistula. Before the procedure, she receives Ancef (an antibiotic), which she develops an allergic reaction. She begins vomiting, feeling ill, and has decreased oxygen saturation. The doctors decide not to perform the procedure and send plaintiff to defendant MedStar Southern Maryland Hospital in Prince George's County. They perform dialysis and discharge her.

Two months later, plaintiff has a corrective procedure for malfunctioning dialysis catheter done at the Vascular Access Center of Southern Maryland. Once again, she is given Ancef, and again, the procedure is not done as she begins to demonstrate a reaction to the drug. She is unable to breathe, feels ill, and becomes unresponsive. She is transferred to Southern Maryland Hospital Center again and is treated appropriately with steroids, Benadryl, and Pepcid.

She is admitted to the hospital from the ER for further evaluations. The records indicate that before the procedure the woman received 1 gram of Ancef as prophylaxis, had trouble breathing and experienced a drop in her blood pressure. She is discharged with a note indicating the complete resolution of apnea after receiving Ancef, but no indication of an Ancef allergy.

Three months later, plaintiff is admitted to MedStar Southern Maryland Hospital again, with blurry vision in both eyes and left-sided weakness. She is evaluated for a stroke. During this hospitalization, vascular access for dialysis is a problem again, and defendant brings the woman to the operating room to place a permacath and gives her 2 grams of Ancef. Within five minutes of administering the Ancef, plaintiff has trouble breathing, feels sick, and has foam forming around her lips. Her respirations become shallow, she becomes hypotensive and is intubated and transported to the ICU. For the first time, an allergy to Ancef is documented.

The following day, plaintiff is transferred to Georgetown University Hospital. She is declared brain dead the next day due to anaphylactic shock induced by the administration of Ancef. The woman dies the next day.

Her Estate files this claim and alleges that the Ancef allergy was suspected in the first trip to MedStar Southern Maryland Hospital, but then confirmed during the second incident. Therefore, it should have been listed as a "known allergy" and not administered. Her Estate alleges that if she would not have been given Ancef that she would have survived the hospitalization.

Have you suffered due to the negligence of a doctor? Miller & Zois can help you get the justice and compensation that you deserve. We have a long history of earning large verdicts and settlements in medical malpractice cases in Maryland. Speak to an attorney today who can help you at (800) 553-8082 or get an online case evaluation.