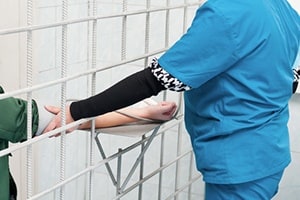 This is a medical malpractice wrongful death lawsuit filed on behalf of the family of an inmate who suffered pulmonary embolism while incarcerated in Baltimore This claim was filed in Maryland Health Claims Arbitration on February 15, 2017. It is the 79th medical malpractice case filed in 2017 in Maryland and the second inmate malpractice lawsuit this year (the first represented by a lawyer).

A man is incarcerated that the Maryland Reception, Diagnostic and Classification Center in Baltimore City where defendant Wexford is responsible for the healthcare providers. He is incarcerated for about three and a half years.

One day, he comes under the care of a physician assistant after a nurse recorded a low pulse oxygen reading earlier that day. The man complains of a tight chest, feeling tired, hot, weak, and in need of treatment. He is referred to the Medical Clinic. While in the Medical Unit, the man has a hard time breathing and is wheezing, so he is given two nebulizer treatments. A chest x-ray is documented in the man's plan of care. He is checked again later that evening, but not given a chest x-ray, and his pulse is still low. He is instructed to return to his cell and that he will have a physician appointment the next day.

However, his condition does not improve, and no actions or treatment is provided to him the following two days. Three days after he is last seen in the Medical Unit, he is moved to the Medical Clinic where he began vomiting and feeling ill. He has pain with breathing and has blood tinged coughs. A medical emergency is called in his room that afternoon after he is found in a wheelchair unresponsive. CPR is attempted and he is moved from the Medical Unit to Johns Hopkins where he is pronounced dead two and a half hours later.

His family files this claim, alleging that if his condition would have been timely identified and treated, that he would have survived.

Have you sustained an injury due to the negligence of a doctor? Miller & Zois can help you. We have a long history of results in medical malpractice cases, earning large verdicts and settlements. Call our attorneys today at (800) 553-8082 or get a free online case review.