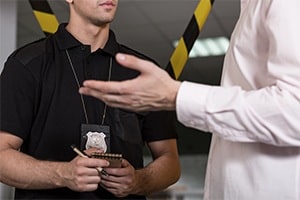 After being married to his wife for eighteen years, plaintiff has recently gone through a three-year separation and divorce. Additionally, he has lost access to his minor children and lost his business of managing rental properties. He is now unemployed. He assaulted by his ex-wife's new boyfriend. He filed for bankruptcy. This is an incredibly bad stretch for anyone, obviously. He develops symptoms of anxiety and depression.

The man goes to defendant Anne Arundel Medical Center for treatment of an exacerbation of his severe depression, complicated by suicidal ideation. He is admitted for a psychological evaluation. He meets with defendant social worker and recounts his life since his divorce, including the thoughts leading him to seek immediate help. He denies suicidal thoughts (the Complaint is confusing in this regard) and indicates no history of violence except his wife's new boyfriend. (But the doctor's notes suggest otherwise which is going to be a big bone of contention in this case.)

Defendants declare the man significantly mentally impaired and give him a medical rating indicating that there is danger of harm to the patient or others. Defendant records that the man indicates he wants to kill his ex-wife, the judge who took his children, and the lawyers involved. The social worker leaves a brief comment in the notes indicating he consulted with his supervisor, another defendant, and a nurse, who agree that he should contact the police.

When the police arrive, they speak with the medical staff. The staff discloses confidential information to the police and place the man in a locked psychiatric room without a witness or legal counsel.

Plaintiff requests to be discharged from the facility. However, the doctors consult with each other, and decide that he should be involuntarily committed. Plaintiff alleges that some of the doctors who signed the certifications for involuntary commitment did not personally examine or observe the plaintiff.

The plaintiff is transported from the hospital to Sheppard Pratt, a psychiatric facility, for involuntary commitment. An inpatient social worker at Sheppard Pratt speaks with police about the man's "vague" "threats," and police request that they be notified when the man is released from involuntary confinement, absent legal or criminal action pending.

After an extensive psychological evaluation, plaintiff is diagnosed with major depression and is found to be mentally incompetent. He gets prescriptions for psychiatric medications and attends both therapy and counseling session. Two days later, the police arrive to question him with approval of the attending psychiatrist but without notice to the plaintiff.

During the interrogation, plaintiff is under the influence of psychiatric medications and is involuntary confined. He is not informed of his right to seek legal counsel or legal guardian. The plaintiff provides the name of the judge from his divorce proceedings and the police obtain a formal charging document. Sheppard Pratt staff permit the police to access plaintiff's ward of the hospital to serve him. Plaintiff is supposed to be discharged four days later. However, Sheppard Pratt is able to hold him long enough to allow the police to arrive and arrest him for threatening a public official.

The plaintiff files this case against Anne Arundel Medical Centers and the doctors and social workers he encountered. He alleges that they did not act in good faith in contacting the police and in allowing them to interrogate him.

There is also a claim against Sheppard Pratt and the staff members, alleging that they had no knowledge as to his propensity for violence, that he never made any threat to physically injure anyone while at Sheppard Pratt, and that he was under the influence of psychotropic medications that impaired his functions during the interrogations. As a result of the arrest and incarceration following his charges, plaintiff has become increasingly suicidal and anti-social.

If you've suffered due to the negligence of a doctor or hospital staff, our firm can help you get the justice and compensation that you are entitled to. Call us today and speak to a medical malpractice attorney at (800) 553-8082 or get a free online case review.