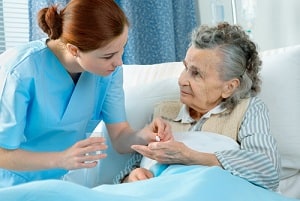 This is a wrongful death nursing home lawsuit filed in Baltimore City after a woman develops multiple, severe pressure ulcers after residing at a FutureCare facility for just two months. On March 21, 2017 it was filed in Health Claims Arbitration, making it the 132nd medical malpractice case filed in 2017. It is the fourth lawsuit filed against a FutureCare facility this year.

A woman is taken to defendant FutureCare Charles Village for short-term rehabilitation and therapy after being hospitalized for three weeks at Sinai Hospital. According to Medicare, this is a pretty average facility During her admission, her skin is found to be intact. However, within two months, she develops pressure ulcers on her sacrum, right buttocks, and left leg. The sacral pressure ulcer is found to be unstageable, with 30% dead tissue, and surgical debridement of the wound is done. However, the wound progress to stage 4, and she has a total of four additional debridement procedures done. These additional procedures are necessary as the staff at FutureCare fails to provide adequate wound care and pressure relief.

Less than five months after her admission to FutureCare, she asks to be transferred home. She is released with a large decubitus ulcer and a poor prognosis. Over the next twelve months, she is hospitalized three days for her sacral pressure ulcer. She develops complications including osteomyelitis and sepsis. She eventually passes away, and her cause of death was found to be sepsis secondary to an infected sacral decubitus ulcer.

Additional Comments Jurisdiction Defendants Hospitals Where Patient was Treated Negligence Specific Counts Pled More Malpractice Claim Information
Medical Malpractice
Client Reviews
★★★★★
When my sister was killed, we turned to Miller & Zois to fight for us. They stood by us every step of the way and we ended up getting more money than we asked for. C.B. (Baltimore City)
★★★★★
My prior lawyer was not able to get the insurance companies to offer a single penny in my case. Then my lawyer referred me to Ron and Laura. It was a long fight and they fought for me every step of the way. My case settled for $1.31 million. A.A. (Baltimore City)
★★★★★
I did not get an offer for my case because the insurance company said they were denying coverage. My lawyer then referred me to Miller & Zois. After Miller & Zois got involved, the offer was raised to $150,000. We thought that was not fair so Miller & Zois took my case to arbitration. Our case was well prepared and perfectly executed. The arbitrator awarded me $405,000. R.V. (Anne Arundel County)
★★★★★
I refer all of my serious injury cases in Maryland to Miller & Zois because they turn over every last stone to maximize the value of their case. The last case I referred to them settled for $1.2 million. John Selinger (New York personal injury lawyer)
★★★★★
As former insurance defense lawyers, Miller & Zois 'know the other side's playbook'. Lawyers Weekly USA
View More
Submit a Law Firm Client Review