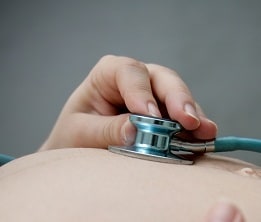 Before conceiving children together, a man and a woman underwent a Universal Genetic Test DNA screening for genetic diseases at Counsyl Laboratory. Counsyl sent a 27-page report of its findings to the women's doctor at Capital Women's Care. The doctor called the woman and briefly summarized the test results, reporting that the woman was a carrier of Canavan disease and the man was a carrier of cystic fibrosis, Smith-Lemi-Opitz Syndrome, and alpha-1 antitrypsin deficiency.

The woman did not seek subsequent genetic counseling because her doctor falsely reassured her that her children could not inherit any genetic disorders. All of the gene mutations that either parent tested positive for would require a contributing gene mutation from both parents for the disorder to express in a child. Because neither parent tested positive for the same condition as the other, the couple thought their children would be safe from genetic disorders. Unfortunately, the doctor did not communicate that the Universal Genetic Test was only a screening for common mutations. There was a remaining risk that one of the parents could be a carrier for an untested variation of a gene mutation.

The couple had three children together. When the youngest child was three months old, she underwent an MRI scan for a head injury. The doctors told the parents that, unrelated to the head injury, the brain imaging showed evidence of Canavan disease.

After receiving her daughter's diagnosis, the woman requested a copy of the genetic report she had taken years ago from her doctor. The report stated, in multiple places and in plain English, that "a negative test result does not eliminate the possibility that the individual is a carrier." Given the woman's positive result for Canavan disease, the report suggested that the couple schedule an appointment with a genetic counselor to undergo further testing.

As it turned out, the man was found to have the less common Canavan mutation 859G. Though uncommon, his particular mutation has been known since 1999 and is easily diagnosable with gene sequencing. If the couple had undergone more in-depth testing before having children, they would've known that each of their kids had a one-in-four chance of inheriting both gene mutations and thus having Canavan disease. Ultimately, the daughter with Canavan disease will suffer a painful and progressive loss of motor control and other brain functions for the duration of her shortened life. Her parents will also incur extensive medical expenses and caretaking responsibilities.