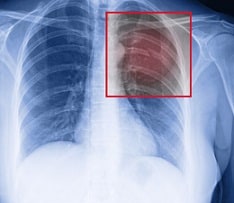 A woman was diagnosed with stage III breast cancer, requiring a left mastectomy. After two years of treatment, the woman's PET/CT scans were determined to be negative for metastatic disease. She continued to undergo oral chemotherapy.

Five years after her negative PET/CT scan, the woman underwent another scan that showed a lesion on her clavicle. Unfortunately, the radiologist failed to realize that the clavicular lesion was a new finding compared to the woman's earlier imaging results. He also misinterpreted the image, reporting that the lesion was located in a bone joint and was likely related to arthritis. In reality, this single lesion (called solitary bone metastasis) was located in the bone marrow, making metastasis the most likely diagnosis.

The woman's oncologist also reviewed the abnormal imaging results and failed to take any follow-up action. After such concerning results, the woman should have undergone tissue sampling and a biopsy of the new clavicular lesion. Instead, she was never informed about the potential metastasis.

After another three years passed, the woman presented to Franklin Square Hospital Center with pain in her right shoulder. Subsequent x-rays, CT scans, and a bone scan identified an aggressive malignant bone lesion on her right clavicle. A biopsy led to her definitive diagnosis of metastatic cancer, which had spread from the primary site of her breast cancer. The woman underwent aggressive treatment over the next year, but she ultimately died as a result of her metastatic disease progression.