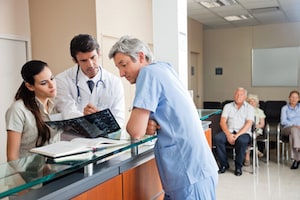 An eleven-year-old boy began experiencing right leg pain. When he first presented to his pediatrician at Kaiser Permanente, he had a limp and swelling in his right leg. Podiatry did not believe he would benefit from a shoe insert, so he was referred to orthopedics where he was diagnosed with a muscle strain.

His leg pain persisted, and six months later the boy went back to his orthopedic doctor. The range of motion in his knee had decreased, so the doctor ordered an MRI. Unfortunately, the doctor misinterpreted the MRI images, believing he saw a benign "tug lesion" caused by repetitive stress on the femur. In reality, the MRI was suspicious for osteomyelitis, a bone infection which required timely medical intervention.

If the orthopedic doctor had made the correct diagnosis, the boy would have been appropriately treated with antibiotic therapy and would have likely made a full recovery. Instead, the doctor negligently referred the boy to a rheumatologist, who diagnosed him with arthritis. Not only did the boy lack the age and gender profile for such a diagnosis, his laboratory, imaging, and other clinical evidence showed no sign of arthritis. The only treatment he received was a prescription for an anti-inflammatory drug.

When the boy returned to the hospital several months later with the same unresolved leg pain, the doctor merely increased the dosage of his anti-inflammatory medication. When the leg pain still persisted after two more appointments, the doctor failed to perform any follow-up studies and continued to prescribe the ineffective anti-inflammatory medication.

After suffering two years of negligent medical care, the boy underwent a bone biopsy which finally confirmed the presence of a chronic bone infection. He was evaluated by an infectious disease doctor and placed on IV antibiotics. Because his infection went untreated for so long, the boy will require multiple surgeries and lifelong antibiotic therapy.