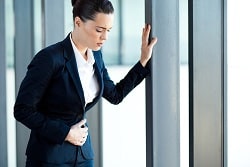 A woman had been a patient at her internal medicine doctor's practice group for decades when she was first diagnosed with diverticulitis - an inflammation or infection in the small pouches of the digestive tract. She had two additional episodes of diverticulitis several years later, which her doctor treated successfully with Cipro. Shortly after her second flare-up, her doctor cleared her for foot surgery, noting that she "is an active 67-year-old female who will be at low risk for complications."

Several months later, the woman presented to her doctor with complaints of stomach problems, including constipation, harder stools, and bloating. She was leery of taking laxatives because her father had suffered perforated diverticulitis after taking laxatives. The doctor diagnosed her with generalized abdominal pain without describing the location, character, or extent of the abdominal pain in his notes. He did not take her temperature, but he did order blood work which showed an elevated white blood cell count and elevated neutrophils, classic signifiers of an active infection. At the end of the woman's visit, the doctor ruled out diverticulitis and told her it would be safe for her to take Miralax (a laxative) for the next few days.

The doctor ordered a CT scan of the woman's abdomen and pelvis one week later. Patients with diverticulitis commonly demonstrate typical features on abdominal CT scanning. Her CT revealed bowel wall thickening, periodic inflammatory changes, and multiple adjacent collections. Just as she feared, the woman was suffering from a severe episode of diverticulitis with a perforated colon.

The woman presented to the emergency room at the University of Maryland St. Joseph Medical Center (UMSJMC), where her diagnosis of diverticulitis complicated by abscess formation was confirmed. She was started on antibiotics, including metronidazole and levofloxacin, and she underwent an abscess drainage with catheter placement the next day. Her condition did not improve. Another CT showed that the abscess and inflammation had decreased in size, but there was new evidence of an abnormal connection between her sigmoid colon and bladder (a fistula). The woman underwent a bowel resection of her large intestine which revealed a large inflammatory mass in the left lower quadrant. Her doctors established a colostomy and removed the portion of her colon affected with diverticulitis.

Seven months later, the doctor at UMSJMC performed a reversal of the colostomy. During that surgery, the doctor encountered extensive adhesions throughout the woman's abdomen and pelvis. The adhesions were so dense in one area that the doctor had to remove the woman's right ovary and fallopian tube. He also repaired a parastomal hernia and checked to see if the fistula had healed, which it had. Although the woman made a healthy recovery, she endured several major surgeries and seven months with a colostomy bag as a result of the delayed diverticulitis diagnosis.