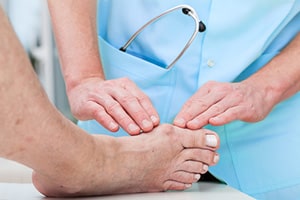 This medical malpractice claim arose when a man suffered from a severe and prolonged MRSA infection because his doctors did not provide thorough and appropriate care. It was filed in Health Claims Arbitration on January 16, 2018, and it is the 25th medical malpractice case filed in Maryland this year.

A man presented to the emergency department at Atlantic General Hospital after stepping on a nail in a horse barn. A spot of blood was visible on the sock he was wearing. His physician ordered an x-ray, which displayed a "small radiopaque foreign body" in in the sole of his foot, located toward his heel. The wound was cleaned, the man was administered pain medication and antibiotics, and he was discharged home approximately an hour and a half after he arrived at the hospital.

Two days later, the man called the Atlantic General Hospital Emergency Department to complain that he had a fever and his foot was red and swollen. He was advised to continue taking the medication. Two days after that, the man returned to the emergency department with an elevated heart rate and white blood cell count. A physical examination revealed drainage extending from the heel to the top of his foot, which was warm, red, and swollen. An MRI of the foot was performed, showing extensive soft tissue infection. A culture of the drainage from his wound was positive for methicillin-resistant Staph aureus. Also known as MRSA, the bacteria can cause skin and soft tissue infections and, if left untreated, can lead to more serious infections of the bloodstream, bones, or joints.

Throughout his nine-day stay at Atlantic General Hospital, the man underwent two incision and drainage procedures, a debridement and wound flush procedure, and he was given a variety of antibiotics including Vancomycin, Ciprofloxacin, Piperacillin, Tazobactam, and Zosyn. He also received Oxycontin after complaining of severe pain with dressing changes and was discharged with instructions to take the antibiotic Linezolid for ten days.

Several weeks after discharge, the man was admitted to Lancaster General Hospital in Pennsylvania. He had been experiencing chills, increased redness and warmth over his foot, and drainage from his third toe. Ultimately, it was determined that the man had persistent MRSA and his third toe was amputated. He eventually recovered with additional antibiotic treatment.

The healthcare providers at Atlantic General Hospital should have known that the man would likely develop an infection after he stepped on a dirty horse barn nail. Infections caused by aggressive bacteria often found in animal feces can spread quickly, threatening life and limb. The man should have been treated more promptly and thoroughly, with proper irrigation, antibiotics, and removal of the foreign body seen on the initial x-ray.