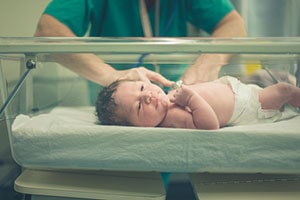 This pediatric malpractice claim was filed in Prince George's County when a pediatrician treated a baby's reoccurring UTIs with ineffective antibiotics. It was filed in Health Claims Arbitration on January 29, 2018, and it is the 52nd medical malpractice case filed in Maryland this year.

A baby girl was healthy and her pediatric check-ups were uneventful until she presented to her pediatrician with vomiting, diarrhea, and a low-grade fever at eight months old. The baby was diagnosed with gastroenteritis and prescribed Tylenol with codeine. The pediatrician never suspected an infection, and a urinalysis was not performed.

At ten months old, the baby presented to her pediatrician again with a three-day fever and vomiting. Her mother said that she appeared to be urinating more than usual. A urinalysis revealed that the baby was suffering from a urinary tract infection (UTI) with a large amount of blood, white blood cells, and 3+ protein in her urine. A urine culture showed that the bacteria causing the infection was E. coli, which is resistant to Bactrim and sensitive to other antibiotics, including Augmentin. Disregarding the urine culture, the pediatrician placed the baby on Augmentin.

The baby had another UTI when she was one year old, which her pediatrician again treated with Augmentin. The pediatrician ordered a renal sonogram and a voiding cyst urethrogram because, having suffered from at least two UTIs in her first year of life, the baby was at risk for kidney disease. The diagnostic tests indicated bilateral Grade IV vesicoureteral reflux (VUR) - a condition which can progress to permanent kidney damage if left untreated. In this circumstance, the accepted standard of care dictates that the pediatrician should have prescribed an appropriate prophylactic antibiotic and recommended surgical intervention. Instead, the pediatrician prescribed Bactrim to treat a Bactrim-resistant UTI.

Over the next two years, the baby saw her pediatrician seven more times with at least four more UTIs. The pediatrician continued to treat the baby with Bactrim and Augmentin, even though the UTIs were Bactrim-resistant and Augmentin-sensitive.

Finally, just before her third birthday, the baby was sent to a urologist at Children's National Medical Center. The urologist diagnosed the baby with Stage II chronic kidney disease, which occurred as a result of her recurrent UTIs and VUR. More likely than not, the baby's Stage II kidney disease will eventually progress to end-stage renal disease.