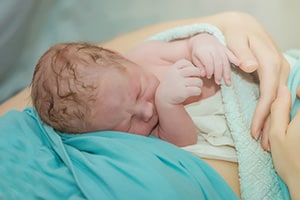 This birth injury claim was filed in Baltimore City when a placental abruption was not diagnosed in a timely manner, and consequently, an emergency C-section was not performed quickly enough. It was filed in Health Claims Arbitration on January 25, 2018, and it is the 45th medical malpractice case filed in Maryland this year.

A woman presented to the Johns Hopkins Bayview labor and delivery unit for observation and evaluation at 34-weeks pregnant. Her most recent ultrasound showed no fetal abnormality, but her vital signs began to decline soon after admission.

The woman's heart rate increased in correlation with the fetal heart rate's deterioration. She was diagnosed with preeclampsia (high blood pressure during pregnancy) and atypical HELLP syndrome, a liver disorder associated with severe preeclampsia. According to the medical literature, when severe preeclampsia is diagnosed, immediate delivery, regardless of gestational age is routinely recommended. Her hematocrit levels were also low and dropping, a possible sign of internal bleeding.

Due to the non-reassuring fetal status, health care providers decided to proceed with a C-section. The placenta was "normal appearing," but subsequent pathology indicated a placental abruption. Placental abruption is the complete or partial separation of the placenta from the uterine wall. Maternal risks associated with abruption include massive blood loss requiring red cell transfusion, disseminated intravascular coagulation ("DIC"), and kidney failure. These are life-threatening conditions can lead to acute respiratory distress syndrome ("ARDS") and death.

The baby was noted to be "not vigorous," "very pale," and "limp" after birth. He was having trouble breathing and the amniotic fluid was stained with fecal matter. Initially, the baby's hematocrit was alarmingly low - yet another indication of blood loss shortly before delivery.

The placental abruption caused the newborn to sustain a hypoxic-ischemic injury, an intracranial bleed, blood clotting, renal failure, and hypovolemic shock. He will continue to suffer permanent brain damage and physical limitations as a result of his birth injury.