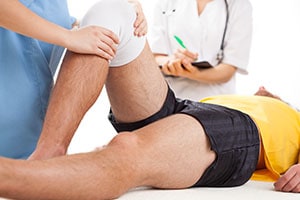 This hospital malpractice lawsuit was filed by a man in Prince George's County after his legs were amputated due to the hospital staff failing to timely treat a popliteal artery injury. It was filed in Health Claims Arbitration on April 26, 2017, and it is the 196th medical malpractice case filed in Maryland this year.

A man is admitted to Prince George's Hospital Center by ambulance following a motor vehicle crash. The EMS team documents the man's injuries as a dislocation/fracture of the right and left calves, and the bicep. The EMS team contacts Prince George's Hospital Center with the man's injuries and designates it as a "Bravo" code, the second highest level of trauma.

A trauma surgeon is on duty at the hospital, but there is not an orthopedic or vascular surgeon called. Upon arrival at the hospital, the man's trauma status is updated to "Alpha," a higher level of trauma. After an examination, it is discovered that there is not a pulse going to the man's left leg. The first surgical procedure to address the pulseless left lower leg does not occur until four hours after the man has been admitted to the hospital. The doctor performs a bypass of the posterior tibial artery with a greater saphenous vein graft. The posterior tibial artery is the larger of the two branches from the popliteal artery.

The man is taken to the Intensive Care Unit (ICU). The ICU staff notes that both of the man's legs are cold to touch upon arrival. The man's pulse to both legs is regularly checked. Over a period of ten days, the man returns multiple times to the operating room to address the viability of his legs. It is ultimately decided to transfer the man to the University of Maryland Shock Trauma Center. After an examination, it is determined that both of the man's legs must be amputated.