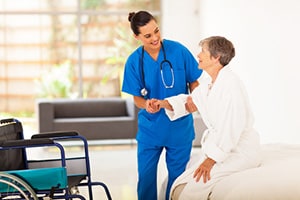 This is a wrongful death hospital malpractice lawsuit filed on behalf of a woman in Baltimore City after she bleeds to death during a procedure. This misuse of heparin was filed in Health Claims Arbitration on April 6. It is the 162nd medical malpractice case filed in Maryland in 2017.

A woman is diagnosed with cancer in her right palatine tonsil. She completes chemotherapy and radiation therapy.

Shortly after she finishes treatment for her cancer, she goes to the ER at Johns Hopkins Hospital due to shortness of breath. She is admitted to the hospital with pneumonia. She is given Heparin, a blood thinner. Her platelet count is low, and she has an increased risk of bleeding. While at the hospital, she has at least two random nose bleeds through her right nostril because the radiation therapy had caused the tissue to become easily destroyed.

She receives multiple blood transfusions but her platelet count remains very low. Six days after her admission, defendant doctors decide that the plan should be to hold off on Heparin if her platelet count fell below a certain number, which it does later that evening. The next morning her platelet count is still below but she continues to receive the Heparin.

Defendants decide to place a nasogastric tube. This is inserted through her nasopharynx and causes her to bleed profusely into her airway. She chokes on her own blood and this causes her death. An autopsy confirms her cause of death was bleeding to death and bleeding into the airway.

Her Estate files this claim on her behalf, alleging that defendants failed to appreciate that she was at a significant risk of suffering a life-threatening bleeding during placement of the nasogastric tube. They also allege that the administration of Heparin was negligently administered and managed. These errors resulted in the woman's pain, suffering and death.

If you've suffered due to the negligence of a doctor or hospital, our firm can help you. For the harm you have suffered you deserve compensation and justice. Call us today to speak with an attorney who can help you at (800) 553-8082. You can also get an online case review.