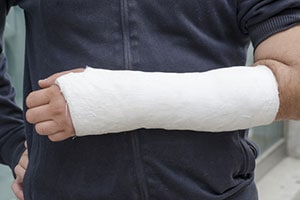 Plaintiff is in a car accident and his hand is severely injured. An ambulance takes him to Suburban Memorial Hospital, where he receives an antiseptic and a splint is applied. The hospital staff informs him that the hand specialist is tied up, and that they are attempting to get permission to transfer him the Union Memorial Hospital Hand Center. However, the doctor needing to approve the transfer is in surgery.

After almost two hours, the physician at Suburban tells the man that the Hand Center at Union Memorial will not accept him and that at Suburban, they have no one to treat him. Three hours after he originally arrived at the hospital, an orthopedic surgeon examines him. The surgeon tells the man he will fix it and will return in a few hours to do the surgery. The plaintiff is taken to prepare for surgery.

The next morning he wakes up with a large external fixture on his hand. He is discharged. Five days later, he seeks post-operative treatment at a different Hand Center in Virginia. He is immediately told that the screws placed are penetrating his tendons and that his finger has been immobilized. The man is left with a finger that is useless.

He files this claim, alleging the hospital violated statutes by not accepting the transfer and that the surgeon negligently did the surgery with a lack of tools and a lack of skills.

If you have been permanently injured due to the negligence of a doctor and hospital staff, we can help you. You are entitled to justice and compensation and Miller & Zois has a history of obtaining large results in medical malpractice cases in Maryland. Call us at (800) 553-8082 or get an online case review.