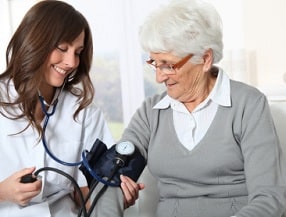 This nursing home negligence lawsuit was filed by the estate of a woman in Prince George's County after she developed multiple stage IV wounds and passed away shortly after. It was filed in Health Claims Arbitration on April 26, 2017 and it is the 195th medical malpractice case filed in Maryland this year.

An 89 year-old woman is admitted to Bradford Oaks Center from Southern Maryland Hospital Center after suffering an acute stroke. Southern Maryland Hospital Center notes that the patient is at a high risk for development of pressure ulcers. The woman develops a full-thickness pressure ulcer on the right buttock after not being repositioned every two hours as required. After several days, the ulcer turns into a necrotic, stage 4, open area on the right buttock.

Over the course of several weeks, the patient develops multiple ulcers on the left and right buttocks. An assessment and care plan is developed by the Bradford Oaks Center's staff. The staff continues to note additional ulcers. After a month, the patient has an episode of vomiting and is finally seen by a physician for the first time since her admission. The ulcers continue to worsen until the patient is transported to Southern Maryland Hospital Center due to unresponsiveness and congestion.

During the hospital stay, the patient is diagnosed with a urinary tract infection and septic shock. After a week in the hospital, the patient returns to Bradford Oaks Center with multiple wounds to her sacrum, left leg, left foot, right heel, left ankle, left lower buttocks and right knee. Three weeks later, the patient becomes non-responsive and passes away.

Her family brings this wrongful death and survival claim against Bradford Oaks Center claiming that it was negligent in their care and treatment of the decedent in allowing a decubitus ulcer to form resulting in subsequent systemic infection and death.