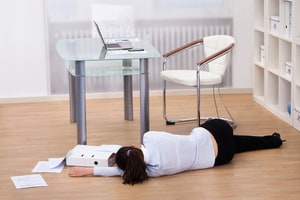 This hospital malpractice lawsuit was filed on behalf of a woman in Baltimore City after she suffers cardiac arrest due to the failure to properly and timely diagnose and treat the woman. It was filed on April 12, 2017 in Health Claims Arbitration, and is the 171st medical malpractice case filed in Maryland in 2017.

A 52-year-old woman goes to the ER at Mercy Medical Center with nausea, vomiting, diarrhea, shortness of breath, sweats, weakness, dizziness, lightheadedness, and abnormal breathing. She has a history of high cholesterol and hypertension. Three hours later, the woman is finally taken to the exam room where she waits for a physician to see her.

A few hours later, an IV line is placed and the technician draws her blood. She is given Zofran, which is contraindicated in patients with prolonged heart rhythm disorders. When the physician sees her, he also orders Reglan to be given every 30 minutes, which is also contraindicated with patients with prolonged heart rhythm disorders as it can increase the risk of sudden death.

Less than 30 minutes after she is finally evaluated by the physician, the woman's eyes roll back into her head and she has seizure-like activity, becoming unresponsive. She is assisted back to her bed from the bathroom, vomiting and pale. She is placed on the cardiac monitor and an EKG is ordered and she receives more Zofran.

Ten minutes later, another seizure-like episode is observed by the woman's daughter. When defendants arrive in the room, the woman's respirations have slowed and her oxygen levels dropped. She is intubated and goes into cardiac arrest. Defendants attempt to resuscitate her but are unsuccessful, resulting in her death.

Call Miller & Zois today at (800) 553-8082 if you have been injured due to the negligence of a doctor or hospital staff. We have a long history of obtaining large verdicts and settlements in hospital malpractice cases. You can also get an online case review.